Yesterday The Telegraph reported that Nottinghamshire Police Force has become the first in Britain to ‘recognise misogyny as a hate crime’.

The police force is recording incidents such as ‘wolf whistling, street harassment, verbal abuse and taking photographs without consent within the hate crime definition.’

There has been quite a lot of confusion in the press and the blogosphere about what this actually means. Here’s my take on it.

There are two definitions of hate crimes. One is the bona fide criminal definition. The other is the broader definition (see below) which is used interchangeably with the former by the media and politicians as a tool to fit their narrative.

An actual ‘hate crime’ must actually be a crime. That is to say, it is pre-existing criminal offence. The prefix ‘hate’ was added by a few Acts of Parliament to make ‘hate’ an aggravating factor in criminal sentencing.

‘Hate’ is hostility to the victim based on their race, religion, sexual orientation, disability, gender or other supposed ‘oppressed’ class the victim belongs to.

For example, if the court found that someone murdered a man because of the colour of this skin – rather than say, because he was sleeping with this wife – this would lead to longer prison term because ‘hate’ would be an aggravating factor in the criminal offence.

These ‘hate’ laws were considered fairly controversial by the judiciary at the time (Tony Blair’s premiership – surprise, surprise), because it goes against the principle of ‘equality before the law’. But these concerns were swiftly swept aside in the name of progress.

What gets the most media attention now are ‘hate incidents’. These are non-criminal incidents which get recorded in the police stats, based on the subjective feelings of the ‘victim’.

All the ‘victim’ has to do is report to the police a non-crime which upset them because they felt that this non-crime happened because they were gay or Muslim or transgender or whatever.

The media and politicians bundle these incidents (which are much more numerous) together with the hate crimes above and proclaim that ‘hate crimes are up XX%’. When it reality it was just a bunch of simpering snowflakes getting triggered by Nigel Farage.

Do note, non-consensual touching is a crime. It is classed as battery. The purpose of reporting ‘misogynistic hate incidents’ is not to prevent Cologne-style rape gangs going around Britain groping women. It is purely a free speech issue about government interference in social interaction. 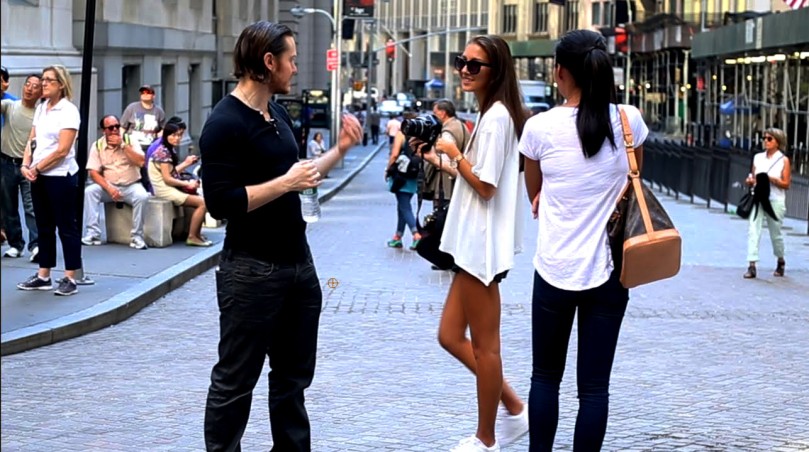 The War on Masculinity

I’m sure many men reading this have had their asses felt or biceps groped at some point by a woman. I see it all the time. How many leaps of logic would we need to take to classify this behaviour as misandry? I somehow doubt that this behaviour will be added to the ‘hate crime’ list any time soon. Nor should it.

Through defiance of logic and reasoning, signalling sexual interest towards a woman (whom you presumably find desirable) can now be recorded as hatred of said woman.

Interaction between the sexes is an ancient and complex phenomenon, so ethereal that most psychologists fail to understand it. The government must stay out of it.

Women are sexually attracted to masculine attributes such as boldness, decisiveness and displays of strength and power.

One of the ways men demonstrate these traits is by approaching women in public. Men who do this will always be more successful sexually than men who wait for women to approach them. While not illegal, this act can now be stigmatised as a ‘hate crime’.

But it doesn’t end there.

The police have a wide range of powers under harassment, public disorder and breach of peace laws. Theoretically wolf-whistling and cold approaching could soon become illegal. All that is needed is the political will to do so. And there is plenty of it. There are those in politics, the media and academia who will not rest until all traditional, masculine behaviour is stamped out.

I have a law degree. Labeling things which are not illegal as ‘hate incidents’ – I do not know which school of legal thought this comes from.

This is Cultural Marxism, as pure as it comes. Dividing people into sub-groups and pitting them against each other. The oppressor versus the oppressed. Liberty in social interaction is being sacrificed upon the altar of victimhood. Equality before the law? Not in the UK.

If you think it is, it is. Whatever they call you, call us. – Stop Hate UK

They’re not even trying to hide it any longer. The objective nature of the law has been changed to accommodate feelings. This is so against the spirit of the law I’m surprised there aren’t more lawyers commenting. But then again, most lawyers are brainwashed cucks. Big government is big law is big money.

The nanny state keeps on growing. We have a nanny as Prime Minister now. There are no true conservatives in government. No one is promising less laws, less regulation, less interference in the affairs of citizens.

The Conservatives are Labour-lite. Labour have actual, self-proclaimed Marxists in their shadow cabinet. The Liberal Democrats are led by an SJW who is neither liberal nor democratic.

UKIP needs to rebrand as a real anti-political correctnness party to at least put pressure on the establishment if we are to have even a hope of halting this nonsense.

Every time the state interferes in human interaction it is given the remit to go one step further. The slippery slope is not a fallacy.